This incredible story was sent to us from Sam Tarhan. Thank you, Sam, for sharing your story and for giving a loving home to so many dogs in need.

I adopted my very first rescue dog in 2009 after I had become disabled due to a hit and run. The dog’s name was Jack he was 2.5 years old and he was a German Shepherd, a real sweetheart. Jack was a great support to me and he helped carry me through some very difficult times he was my devoted and faithful friend. He could be a handful especially when he saw a cat or another dog he’d want to drag me right to them.

In 2010 I adopted my second rescue dog from the same humane society shelter that I got Jack from. Her name was Eadie she was 3 years old and she was a Brindle Pit Terrier nicknamed “Sweetness” because all she wanted to do was love and be loved. Both of my dogs were days away from being put to sleep because no one wanted them and because of their breed but I wanted them and took them home. As with Jack, Eadie could be difficult at times to handle after all I was disabled and had to walk them with a cane in one hand and the dogs leashes in the other. But they were quite the pair together and a lot of fun to watch teasing and taunting each other and just playing around, they made me laugh even when I felt that I couldn’t. When I was sick and when I lost my job they were there. Those two were inseparable.

Sadly in Aug. 2013 Jack had to be put to sleep due to seizures caused by a brain tumor he was 6.5 years old. Then it was just me and Eadie for about year until near the end of 2014 when I adopted my third dog. His name was Aden he was 4 years old, a Staffordshire Pit Terrier who had been in dog fighting, been abused, mistreated and was insecure and afraid of people that he didn’t know. Even rescues wouldn’t take him. His chances of living to see the new year: not good. But I took him in to my home and in a couple of few weeks he and Eadie became good friends. 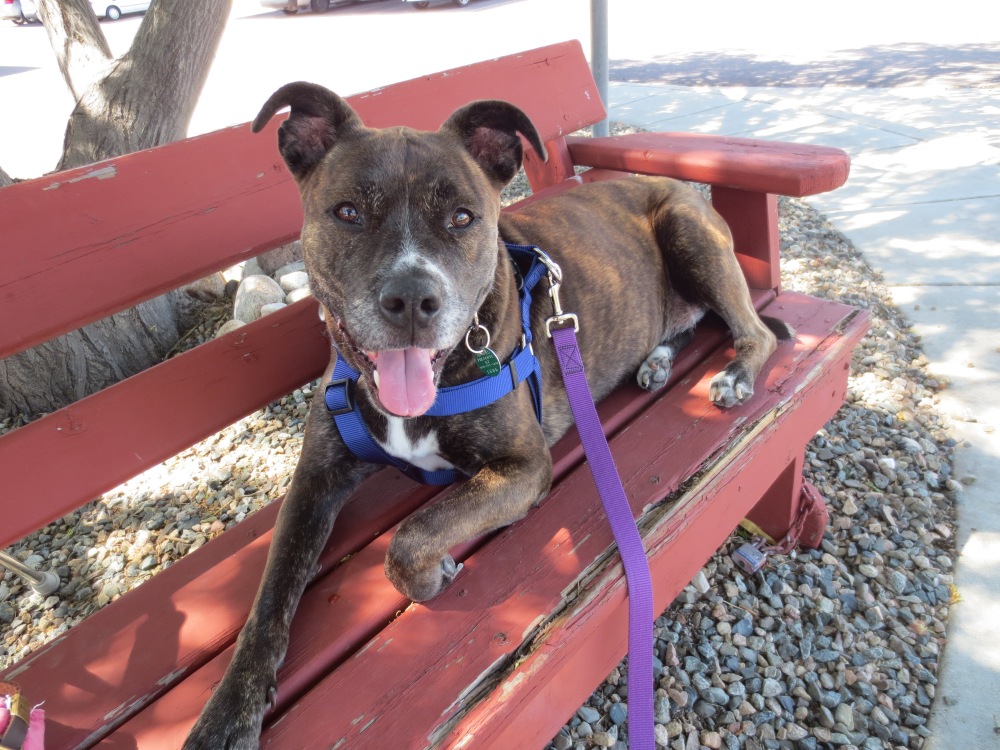 He could be a real challenge at times because sometimes he was hostile towards Eadie but eventually her sweet spirit won him over and changed his heart. They’d romp around in the snow together and wrestle in the home — they were fun to watch. In 2015 I moved to a better apartment with lots more room and in a better area. When I went to sleep at night they were in the bed with me as always. We were all very close.

Sadly in Feb.2016 Eadie fell terribly ill and had to have surgery and I found out that she had cancerous tumors in her liver the doctors did what they could but the damage was done. After the surgery Eadie put up a good fight but in the end she decided to let go and she died peacefully in her sleep at the Animal Hospital because she didn’t want me to see her go like that she loved me so much. Eadie was my special girl and my bright light, my ‘’Everglow’’ as the song says. She had appeared in at least 4 Prescott, AZ Annual Christmas Parades and every one that knew her loved her.

Finally in Feb. 2016 shortly after my Eadie passed away I adopted my latest dog Nadia, she was a tan Pit Bull Terrier and she was over 1 year old. She had been abandoned by her previous owners because they got tired of her running away and they just didn’t want to deal with her anymore. To my surprise both Aden and Nadia hit it off almost immediately and they soon became fast friends even more so than Aden and Eadie were I know that this is largely due to Eadies’ impact on his life.

Of course they’re both challenging to me, Aden is reserved and Nadia is excitable so I’ve had to start walking them separately because Nadia irritates her brother if I walk them together so for now they get walked individually. And Nadia has a cry like a banshees’ wail but I love her all the same. When Jack passed away he was 6.5 years old and when Eadie died she was 10. Nadia has just turned 2 years old and Aden will be 6 years old in July this year. I look forward to many more years of joy with my two pups I have now and I will always cherish the wonderful times I had with Jack and Eadie they will always have a very special place in my heart. I will never forget them we were family after all. Anyways, I do have all my photos of them to remind me of all my special babies they will forever be in my heart.

This is my Rescue Dog Story it’s a bit long but it’s my story nevertheless.