This rescue story was sent to us by Rick from St. Louis, Missouri. Thank you Rick for sharing Parker’s story with us!

What a boy! He was a “stretched” Beagle, sometimes we called him a “Basgle” because he was a mix of Beagle and Basset Hound. He was symmetrical…you could split him down the middle from the tip of his nose to the end of his tail and he had matching colors (whites, tans, browns, and blacks peppered with gray) on both sides.

“His teeth look really rough” someone would notice and we told his story. We told his story numerous times….a true rescue, one of over 100 dogs hoarded by a woman down in the boothill, rescued by the Humane Society, 75% of the dogs were put down immediately. But Parker survived. He was found in the barn of this woman’s property and his teeth were mangled because he had tried to chew through the barbed wire. Yes, he survived…he had mange, he had heartworm, he had a medical file from the Humane Society thicker than most humans. But he survived and became our dog.

I had told Hope and Maya that you know you have the right dog when he comes right to you when you go by the cages in the adoption room of the Humane Society. You just know it…you just got to be patient. We looked at many dogs and asked to have many dogs taken into the “hospitality room” of the adoption center where you have a chance to interact with the dogs out of the cage. Dogs that we thought were good fits in the cage just didn’t work out in the hospitality room. Patience paid off. Parker was something else, he walked into that hospitality room and when he was let off the leash, he ran across the room and jumped right into my arms. I think when he was mid-air on his way into my arm, I said, “Parker’s the right dog”. 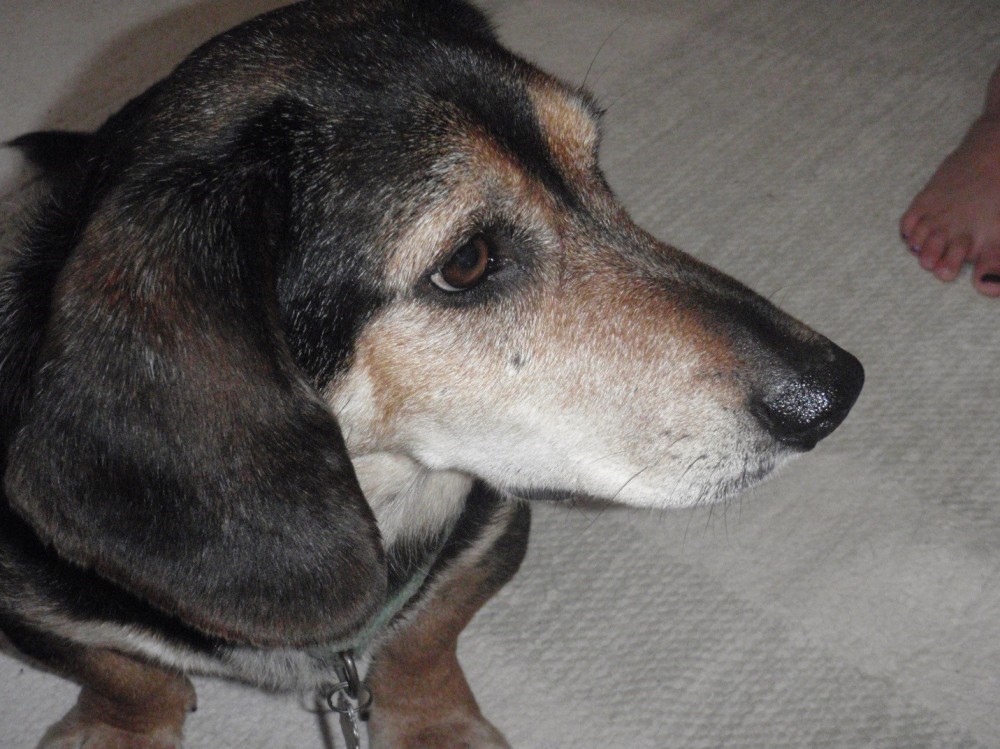 The adoption of Parker was still another story. Because Parker had been such a hit with the staff of the Humane Society, they really had a hard time letting go. The adoption counselor was very grumpy and insisted we agreed to certain things before she would allow the adoption (mainly that Parker needed to be crated when we weren’t around). I think she was just grumpy, because she had grown very attached to Parker. When we went to pick up Parker to take him home for the first time (which happened to be on Hope’s 8th Birthday), many of the Humane Society staff came into the lobby to say their good-byes to Parker. The little guy had really struck a chord with the staff, and he would strike a chord with many more people along his path over the next 7 years.

Two weeks after we got Parker, the Humane Society’s photographer came to our house to take pictures of Parker in his new home. (Note: The photographer had been part of the rescue team that found Parker…He remembered that Parker had been in the barn and he reiterated that he was surprised that the Humane Society was able to save any of the animals in that rescue.) Anyway the photographer took hundreds of pictures of Parker in the house with the girls, and in the backyard, and in the neighborhood. One of the photos on the walk in the neighborhood has Hope and Maya walking Parker…Maya at 4 proudly walking along with her joyful sister (Hope at 8) with Parker bopping along side them with a look of pure freedom. The photo hangs in our dining room and probably always will. 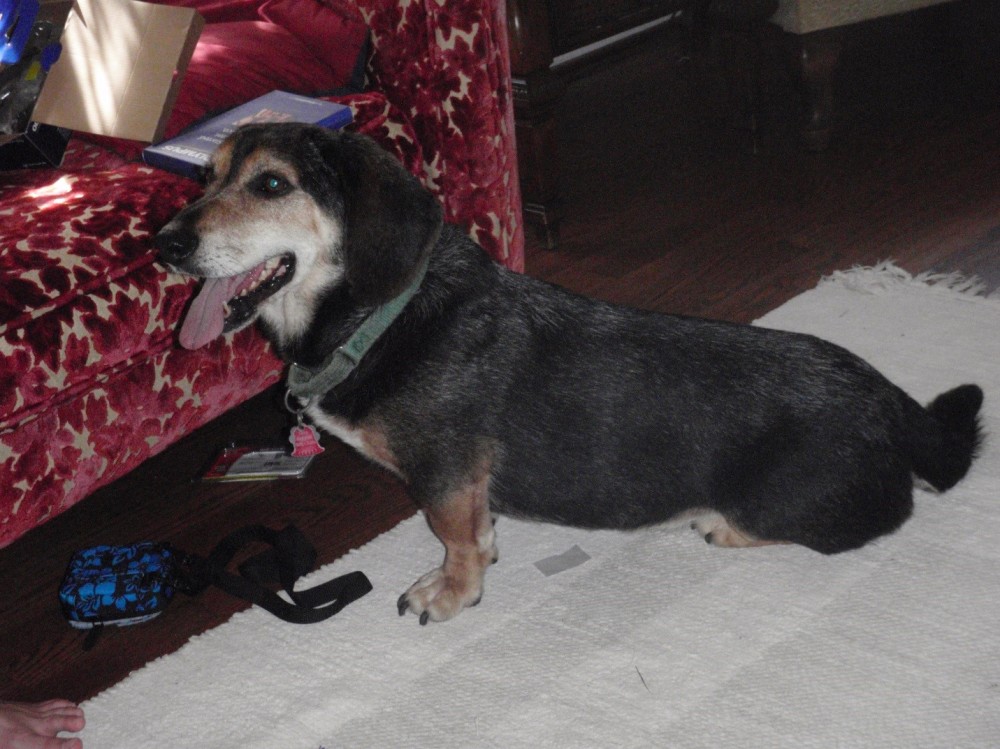 So the years pass….Parker’s daily walks…he understood the word “Walk” and he understood the spelling of “W-A-L-K”. Maybe he knew which were Carolyn’s walking shoes…or Carolyn’s walking jacket. His ears would perk up, he would come bounding down the stairs or across the floor, stand on his hind legs, shaking his front paws. Uncontrolled excitement. Pure joy. Once he was outside, he wanted to let all the people and dogs in the neighborhood know that he was out for his walk. The beagle howl could be heard even ten houses down. Waoooo! Waoooo! Walkooooo! Pure joy.

Sleeping on our bed…sprawling his little body on the king size bed in such a way that two humans couldn’t get into bed without pushing him…. By morning time, Parker on one corner of the bed and Layla on the other corner…Spending the day lounging on the yellow chair in the living room…hiding in the covers of Hope and/or Maya’s beds….digging holes in the backyard, in the vegetable and flower beds…napping in the raspberry patch….meditating on backyard smells as he sat like Buddha on the back porch….resting his body on my leg while I sat and listened to a Cards game on the back porch….Looking up when I said “You’re a good boy”…. Good memories! Great memories!

So Parker, you picked Good Friday (March 29, 2013) for your last day. Good Friday. Wow. You took a walk in the morning, Waooo, and then your body just let go a few hours later. What a way to go! We didn’t roll away a stone, but your memories will always be with us.

Well, they say that humans are so attached to dogs because they provide us with a perfect example of unconditional love. Always loving…always faithful… always there for us in all our moods. Parker, you did your job. I am so glad you were found and we found you and we got to have you in our life for almost 7 years.