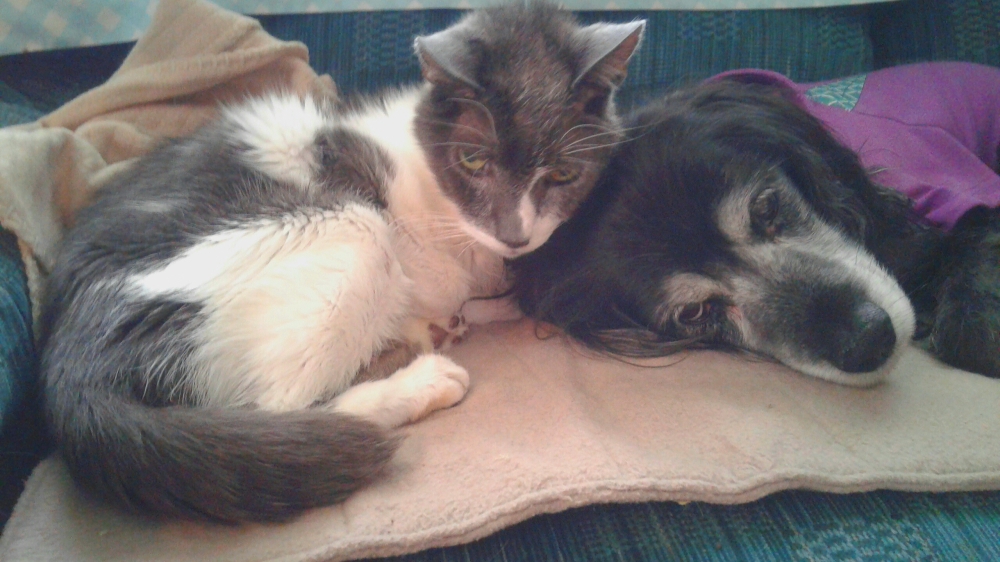 A wonderful rescue story about an abused and neglected dog who was looking for his forever home… and found it!

Ten years ago, the week before Mother’s Day, my partner and I were driving down a highly traveled road in rural Virginia on our way to a jobsite. Halfway to work it started raining and as we came around a bend in the road we saw a dog sitting in the middle of the opposite lane.. in front of a logging truck. If you know anything about trucks that size, then you know they simply can not stop on a dime. Traffic was backing up behind the logging truck and without knowing what we were getting into, we pulled over.

I opened the car door and said, “Hey baby! What are you doing in the road? Why don’t you come over here?” He immediately ran over and jumped right into the vehicle, surprising us both.

He was friendly but seemed fearful. I knew that demeanor, I am an abuse victim too and it’s hard to ignore the obvious signs. We pet the dog and tried to soothe him while discussing what to do with him. His anxiety level was obvious as it was not even remotely warm, yet he was panting like mad. We decided the raucous excuse for music that was playing was probably not helping him, so we switched CDs to Gordon Lightfoot. From the backseat came a paw very lightly patting me on the head as if to say thank you.

My man looked at me and even though we had just lost a dog two months before he said, “Happy Mother’s Day! You wanna keep him?” I dropped Adam off at the job site and returned home with our new baby.

He is a mix, Cocker Spaniel and Border Collie. His coat was long and dreadlocked so I set to making him more comfortable. We spent that whole morning and afternoon on the back deck together while I trimmed all his fur down to about 1/8″ so I could bathe him. In the process I discovered over three hundred fleas on his body (after 300 I stopped counting!), more than 40 ticks, flatworms were crawling from his rectum, he had a cut on the cornea of his left eye, a cracked canine, a broken and rotten molar on the same side, he had bird shot (lead pellets) embedded in both of his ears…that this dog was even trusting me to examine and groom him began to blow my mind.

After thinking about it I realized someone had kicked this dog in the face with a steel toed boot because when I put my husband’s shoe up to his head the placement was too much of a match to ignore.

When I tried to bring him inside the house the real tell tale signs of abuse appeared. He refused to cross the threshhold into the house so I picked him up and carried him inside. As soon as I put him down he began shaking and urinated himself running for the door. I held him in my arms on the front porch and cried. Someone had seriously hurt this dog physically and emotionally.

When I took him to the veterinarian to care for the flatworms, have Lyme’s and heartworm testing, make plans to have him fixed (since he was still intact at the age of about 1 and a half years old and already had a suspicious mass on his colon)and get a general check up, the vet agreed this dog had suffered severe neglect and abuse.

This dog’s character was simply broken. He has been our baby boy for 10 years and even after hiring a behavioral specialist, there are still many issues we have not been able to resolve.

As much as this might devastate the average person, it makes Lightfoot so dear to me. I finally have someone in my life that understands certain effects of abuse can never be reversed. I feel better prepared to care for him because I have more patience when he freezes instead of following a command. He has filled a very empty space in my heart -where I needed the reminder that just because I’m damaged doesn’t mean I am any less worthy of love. He is deserving of every ounce of love we can offer him. Watching his trust grow and his fears dissipate has been the most challenging and most beautiful journey ever!

My life would simply be empty without him.